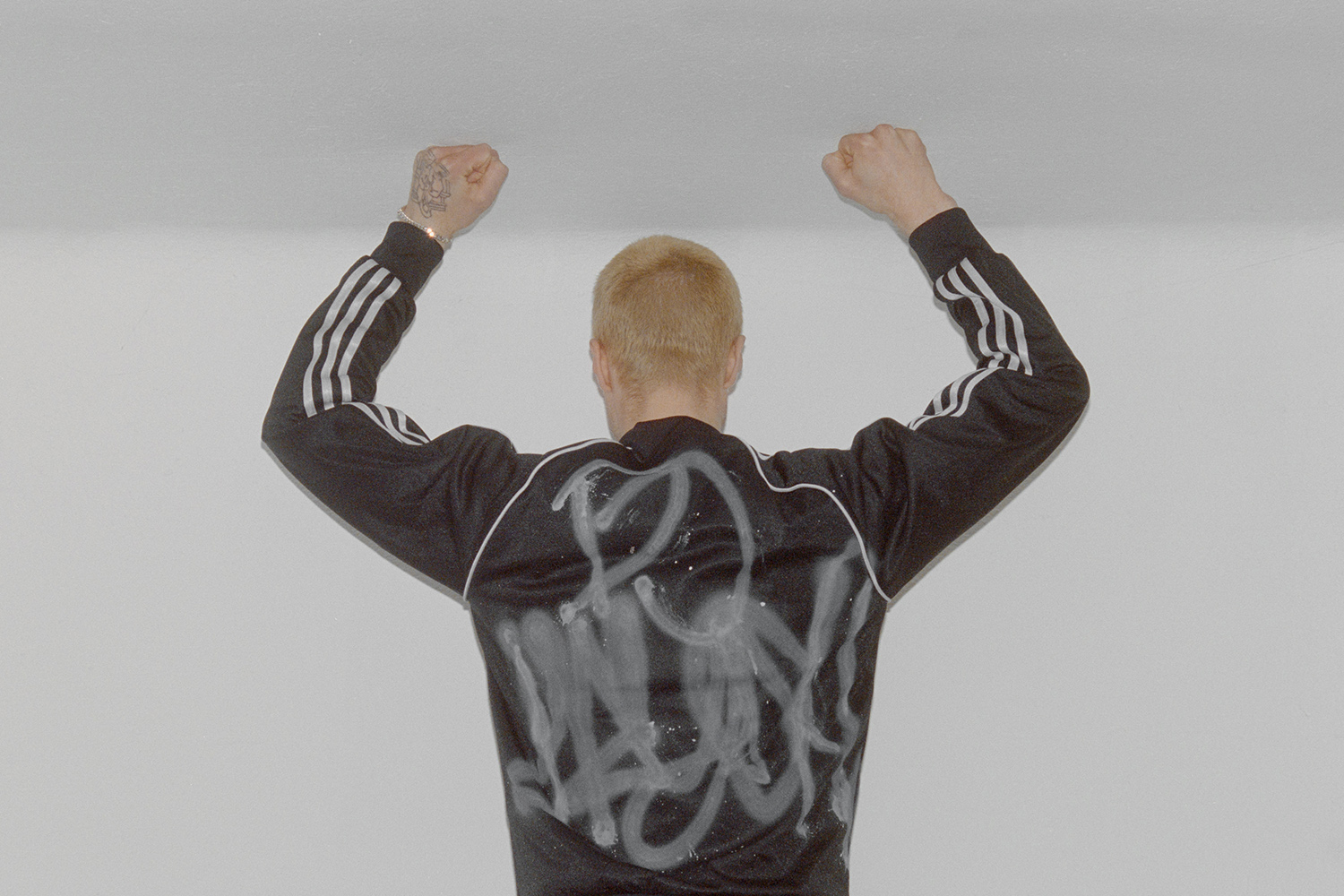 DJ Haydn or Fabian is an artist and DJ based in Stockholm. We connect on Zoom to talk about his musician alter ego, music and skating.

Fabian: Hi! Can you see me?

N: I’ve been looking forward to our little talk. I’m sure you’ll be by far the most chill person I’ll interview today. How are you?

F: I’m good. It’s kind of rainy and gray here, then the soul can get a bit rainy and gray as well. But sometimes it’s just like that, and I’ve come to terms with this being a day when the soul is a bit soft. To be honest, I like days like this as much as I like the sunny ones.

F: Well, my name is Fabian… Wait, I just have to find my cigarettes… I go by the name DJ Haydn, haha. And I do music, like all the time.

N: How did you come up with the name DJ Haydn?

F: It was this name I came up with when I was 16 or 17 and had just started producing music. There’s an old composer called Haydn, but I don’t really know if it has anything to do with that. It could probably have been anything, I just kind of liked it. I wanted my alias to be “DJ something”, as my biggest idols back then had the word DJ in the name – like DJ Rashad or DJ Screw. It’s funny how DJ Screw makes really slow music, and DJ Rashad makes really fast music and I’ve ended up somewhere in-between BPM-wise. Now it’s just kind of stuck and I’ve thought like a million times that I should change it. When I was younger I always thought I could come up with something cooler or with more substance, but now I think it’s quite nice. I’m happy when I hear people call me DJ Haydn, it means that it’s weird enough to stick with people.

N: You know there’s a book called something like “Change your name to get famous”. According to it, it’s key to have a strange name if you want to become recognized.

F: Maybe I should just change to DJ Haydn in my passport as well then? But then there is the question of who you wake up as and who you go to bed as.

N: Do you usually wake up as DJ Haydn?

F: Sometimes I do, and then everything just goes so damn smooth. Then I’m just working and doing stuff, you know? But sometimes I wake up as Fabian [makes the cutest kitty sound, miew]. That can be good as well, of course. It’s quite weird where you draw this line between your artistic persona and yourself. I guess these two just merge somewhere and from there something nice is created.

N: If you would give explaining your musical style a try – what kind of music does DJ Haydn make?

F: I feel like what you make is a combination of all the stuff you have been listening to all your life. I’m a total nerd when it comes to music. I’m not so interested in genres, so it’s always hard to explain what you do when you speak to other people about it. I try to just go my own way with it.

N: Yeah, I understand the question “describe your music?” gets a bit old.

F: You’ve heard so much music since you were a baby. Especially me, both my parents are also musicians, so I must have heard music since I was still inside of my mother. All that music I’ve heard has been processed during a lifetime and now just gets squeezed out in its own little way. Things have just been boiling inside me for like 20 years. I started going to raves when I was 17 and that whole scene has been really important to me.

N: I feel like you’ve been doing music all your life really. I mean, you and I were even in a band together when we were like 8 years old. You played the drums and we used to do these concerts at school.

F: Music has been my thing always. I reckon I only went to school because I knew we were going to have music class.

N: I know you collaborate a lot. Tell me a bit about that!

F: It’s really amazing when you have found your niche and style, and then you meet other people that have been doing the exact same thing their whole life. They fuck with your stuff and you fuck with theirs, and then you go about creating something together. I’ve been thinking a lot about how sessions work lately, it’s a such a delicate situation to create things with other people – like inviting people to your own world and at the same time being invited into theirs, and trying to find a sound together where these two worlds collide. It’s really cool and I love working like that. You can be in a session with someone for 16 hours and during that time everything is ok, you can cry, you can laugh, you can fight or just be quiet with each other. It’s just really intimate.

F: Exactly. It’s really intense to create with other people, but I love doing it.

N: I know you are really into skating. Wanna tell me a bit about that?

F: Skating, like music, is something I’ve always had in my life, and it’s been a big comfort and security for me. Skating is a subculture that’s really welcoming. Many people that are drawn to skating are trying to escape something else, especially if they’re young. It can be like another family, which I think is beautiful. Skating has been a huge influence on my music and who I am today. The first album I made with Busu was really inspired by skate culture and sound, this high school, punk rock sound, done in our own way. I’ve always felt so blessed to have something to rely on. No matter what happens in life, I’ll always have music and I’ll always have skating. If you wake up in a strange mood, everything is fine again if you go and skating. And it’s fun how skating now is more hyped than ever.

N: Is it more of a thing now than it used to be? I thought it reached its peak in the 00s.

F: Really. When I started skating it was cool of course, but it’s always been a real boys club, which has been toxic. Now it’s opening up more, and it’s become way friendlier for newcomers. When I started it was a lot about not being in the way of the pros. The last few years I feel like there’s been a turn in the community where people actively work for it to be open and accepting of everybody. We take care of the kids and want it to become a place where they can feel secure.

N: What is subculture to you?

F: Home and security. I like how if I just have my skateboard, I can go anywhere and find my crowd. Barcelona will always have Macba, all cities have a spot where skaters hang. In Stockholm there is Obsan [Observatorielunden]. It’s home in the sense of unity with others who share interests with you.

N: I love your style. Do you want to tell me a bit about where it comes from?

F: Oh, I’m happy to hear that. My style has also been very marked by skateboarding and music. I feel like I’ve had a million different styles over the years, it’s been all over the place. I mean, we went to school together, you remember how it was. I was a punk when I was 12, with skinny jeans, eyeliner and a Mohawk. I enjoyed hanging out at Plattan*. Then suddenly, from one day to another I felt like I was more into hip hop, with baggy jeans, shaved head and big hoodies. I remember people in school used to mock me for changing my style often. Now I feel like it’s just a vibe. I like to be able to just wake up and switch it up when I want to, and to not always look the same or follow trends. I change my hair every month and I have to do that to feel good. It’s my style, and a way to express myself. I feel as I get older, people are learning to like it.

N: It’s the same thing with everything you do that is new to other people. You just have to continue doing it and eventually people will like it, or at least accept it.

F: My parents have always pushed me and accepted me however I wanted to look, if I was wearing makeup or whatever. But as soon as I was outside of that I felt like people were judging me for looking crazy, I feel like Sweden is especially bad with that. There are these “jante”, “lagom” ideas**. It’s toxic. Just fuck that, be whoever you wanna be when you wake up.

N: I just want to round up with some short questions. One popular opinion, and one unpopular one?

F: Less police. Don’t live in a city if you can’t cope with loud sounds and smells. Maybe those were two unpopular ones?

N: I would say the other way around, haha. Good or evil?

N: Are you a nice person?

N: I guess that was all from me! Thank you for a cute talk, Fabian.

* Plattan is a square by the central station in Stockholm where all the emo kids used to hang out in the 00s.

** “Lagom” and “jante” are two expressions that only exist in the Swedish language and have to do with not being too much, never trying too hard with something and being like everyone else.