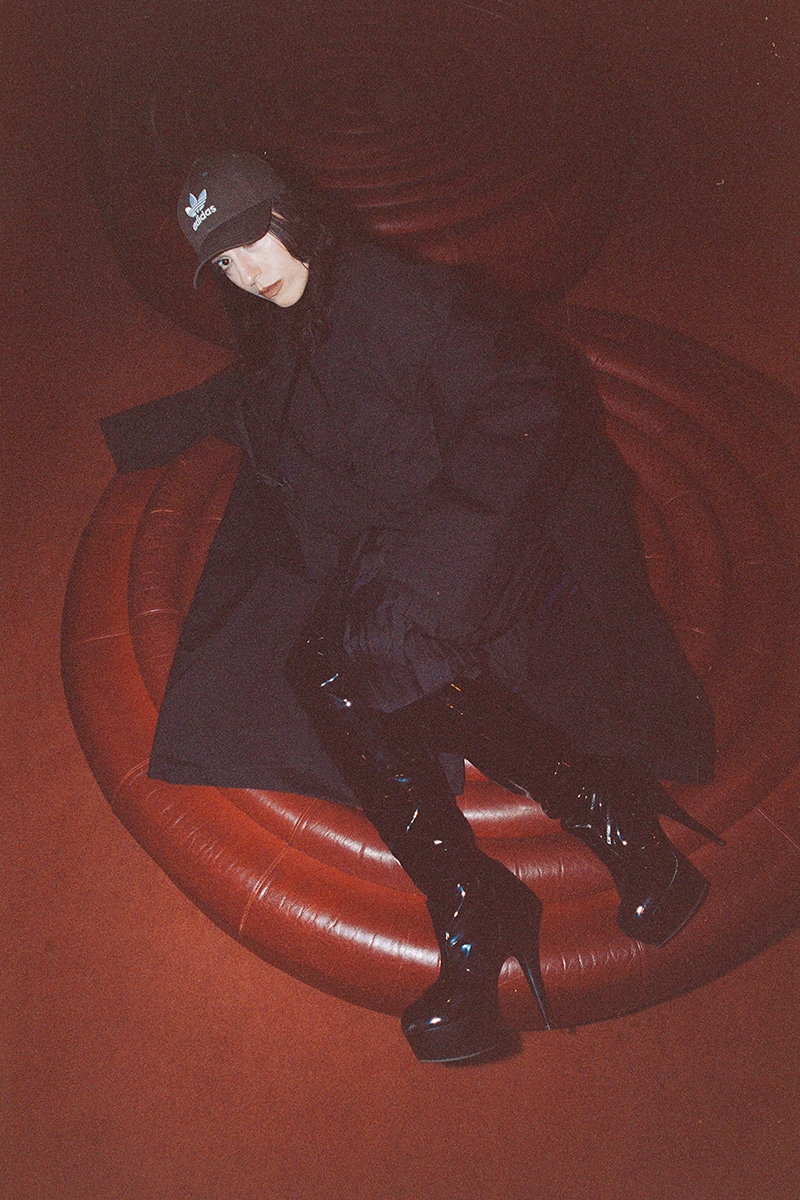 Zhala is a multi-talented cool-girl based in Stockholm. As one of two under Robyn’s label Konichiwa Records (Robyn herself being the other artist), Zhala has continuously made music we want to hear and influenced us with her uncompromising style and vibe. We talk about work, about being sick, about love and about making a hit.

Nora: Springtime is so wonderful. Being allergic like this seems unnatural.

Zhala: Such a bummer.

N: How did we end up here, with humans allergic to nature?

Z: The artificial world really is taking over. Things have to be completely sterile for us.

N: How are you doing?

Z: I’m doing good, feeling good. Just trying to fit everything into life. It’s so fucking much, I don’t really get how people do all these different things at once. If I try to do that I just run into a brick wall. But I’m having a blast right now.

N: What have you been up to?

Z: Doing some music… Ah, I love that you’re smoking. I shouldn’t say that… but it’s such a vibe.

N: Yeah, I just fell off the wagon again with smoking. Blame springtime for that too.

Z: I get it. I usually get disgusted by cigarettes but lately I’ve really been enjoying the smell.

N: It’s the season, Zhala. Spring and cigarettes are a thing. I’m really not supposed to smoke, we’ve talked about this before, I’ve got this autoimmune disease that turns worse from smoking. But somehow quitting smoking made death seem real, like I was accepting its inevitability. There’s something attractive about smoking which has to do with negligence in the face of death.

Z: I totally get it. Balance for me has always meant extremes. For me, that has meant being super sober and wholesome and then occasionally just completely wilding out. The same applies to my healing process, as you know I have an illness as well. You ask yourself, what’s the end goal? My calling isn’t to be some Buddha type, my calling is to get my hands dirty and live life. It might mean I won’t live that long in the end, but at least I’ll have lived the way I wanted.

N: I think you have to allow yourself those wild periods, or you’ll completely lose it. There’s something about constant self-control which is unhealthy as well, especially for a creative person. For me, creativity has a lot to do with a lack of self-control.

Z: Exactly, too much self-control will make me focus on the wrong things and I end up thinking ”why do I spend so much time on this when I could be making art, when I could be doing bigger things”.

N: The healthy life is so time consuming as well… Makes you socially weird too.

Z: Right, you can’t really be social when you’re that way, you just want to be by yourself.

N: Looking at your work, I got thinking about the many different means of expression – music, acting, style, vibe – that you work with. Do you see everything you make as part of a total artwork?

Z: I think I try to keep up with myself as I reshape, following along in life, in what our present day is about and what I myself am genuinely interested in. I’m focused more on that process of reaching a true place, rather than defining things clearly. It’s more of an exercise, practicing various forms, crafts and means of expressions. Anything that piques my interest. Of course, half the time I’m just sitting there, not having a clue about what I’m doing. Acting for example, I have no idea what I’m doing there. At the same time, it does feel very natural, so in a way you could say I know exactly what I’m doing. But it’s not the same when I’m an artist, then I’m more like a director, more in charge perhaps. When there’s too much of one thing, I get restless and bored and lose my purpose. When these different forms are allowed to co-exist, I feel at home, and the various forms inspire one another. I love art, and for me, creativity is also a homage to that, to entertainment and escapism. I strive to create a fictive world that mirrors my true self. For me, that becomes something much truer than the real world, which is constructed in a certain way that never really felt like home to me.

N: I can relate to that. For me, creating is a way of detaching from reality, which is so damn boring.

Z: I feel I’m much more myself when I detach from reality, like I crystallize into my own essence. I might be my truest self on stage. Of course, there are intimate spaces too, ones I share with my wife for instance.

N: Speaking of your wife, how does love fall into all this, creating an alternative reality for yourself?

Z: We’ve been married for 3,5 years and she’s taught me a great deal about what love is. I fall in love easily, constantly having small crushes on everyone. But I haven’t always been interested in relationships, I’ve been more interested in what I’m doing or want to be doing. My marriage is the greatest thing I’ve been involved in. Until I met my wife, that thing was music. Music was the greatest love I’d known. So meeting my wife changed everything for me, my focus, my priorities.

N: There’s potential for conflicts there, balancing your own creativity with being in a relationship. I’ve had problems in previous relationships where I’ve been frustrated when my partner has demanded that I divert attention away from what I’m doing. But then in some relationships all of that can coexist.

Z: Sometimes it just doesn’t work. With Loella I feel like everything becomes better somehow. It is possible to elevate everything in life. To be loved and love and have that elevate your art. It’s so fucking cool. It’s the greatest thing there is.

N: Some time has passed since you last released an album. How do you view that, creativity and artistry in relation to time? Many are stressed about creating, but it seems like you allow yourself time and I really respect that. I sometimes feel like I’ve hurried too much, at the cost of a lack of lust as well as a loss of the personal touch. I can regret that, but at the same time you just have to do things sometimes, there’s a constant pressure to keep producing.

Z: I think about this a lot because obviously there’s pressure to produce. When I released my album in 2015 I worked so hard. I didn’t have a single day off in over a year, I didn’t put any limit to how much I would work. That triggered my PTSD, I short-circuited and ended up just completely malfunctioning. I got sick in all kinds of ways, it was as if every trauma surfaced at once and I had to deal with them all, which took some time. I also wasn’t sure if I enjoyed that exposure, so I had to back away, re-assemble somewhere else, shift my focus. For me, everything was always about creating so I had to see if I could create another life, one which would be about something other than all of that. It took me some years to end up where I am now. I don’t want to produce for the sake of production, I want to produce when I have something to say. I’ve learned that life can also just be about waking up in the morning, meditating, doing yoga and trying to understand what it means to be human. I thought you were supposed to sacrifice everything, so that’s what I did.

N: Who do you make music for? Do you imagine an audience or is that more of a necessary evil?

Z: A bit of both. There are so many aspects of music that I enjoy. For me it’s a private endeavour, which is about my own development and all that existential stuff, but at the same time I’m really interested in making art accessible. Not so much in the sense that everyone has to enjoy it, more in the sense that it should mirror our current times and feel relevant. Even if I might have strayed away from what most people like, I’m obsessed with popular culture and entertainment. Pop music has saved me so many times, I have such great love and respect for it and I strive to find my own place within that. I also want to surprise and be surprised. It seems boring to just make music for yourself, but I also don’t want to create just to please others.

N:  What’s the deal with music that masses of humans simply love? What makes millions of people euphoric? What’s the recipe, is there a common denominator there?

Z: It’s so cool! I really respect that thing, it’s so religious, people coming together.

N: Pop music somehow manages to break through everything, overlap everything.

Z: It would be so cool to be able to pull off a real hit song. You just listen and think ”how the hell did they do this?” I think it’s so awesome, doing that is one of my goals.

N: There’s something about just going ”baby baby” and making everyone else in the world feel ”baby baby” deep down in their souls.